"Westward Hope," Book One. Michael had once betrayed Caroline's trust, in the worst possible way.  Can she trust him to get her to Oregon Country, and can he trust himself to accept her forgiveness and God's?

"Town, a Novel of the Oregon Settlement,"
Book Two. 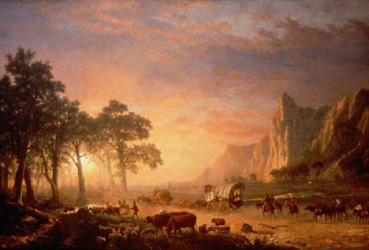 All the brightness and the teasing, the fantastic stories, all the elements that made the Michael she’d known were gone.  “Don’t ever,” he rasped, “tell me you don’t feel anything.  Not after that.  Don’t ever lie to me, Caroline.”

She was trembling, and turned so he couldn’t see her face.  Would it be so bad to let herself  love him, to finish what they’d begun?

He said he’d marry me.  He wants to marry me.

He’d take care of me -- he proved it during the cholera.  He won’t leave me again.

And she loved him.  She'd never stopped.

But it wasn’t enough, even now.

Caroline knelt again, and dabbled her fingers in the west-flowing trickle.  She looked up at Michael, tall and unsmiling in the moonlight.  “Michael, the Bible says ‘How can two walk together if they are not in agreement.’  And it says, ‘Be not yoked to unbelievers.’  I can’t marry a man who doesn’t serve the Lord.”  She stood and touched her damp fingers to his lips.  “This water can’t flow east and west at the same time.  It’s a divide, Michael.  And that’s how we are.”

She left him, standing in the moonlight.  She dared not look back.

It had been hard for Caroline to forgive Michael; it was harder still to let him go.  But they couldn’t go a step further until he’d accepted God’s forgiveness – and forgiven himself.

“Westward Hope” takes place during the heady days of the Oregon Trail, when thousands of pilgrims embarked on the journey of a lifetime.  Like Abraham, they “went forth to a place they knew not”; and like Abraham, none of them remained unchanged.

The inspirational historical romance is the first in the three-part “Western Dreams” series. "Westward Hope" was the winner in its category in the 2015 Tara and Lone Star contests, and finaled in the 2014 Maggie Awards.
"Westward Hope" will be published by Pelican/White Rose. I'm currently working on the sequel, which follows some of the emigrants into their Oregon Country experience.

Kathleen D. Bailey:
I’m a freelance writer with 35 years’ experience in the nonfiction, newspaper and inspirational field.  Born in 1951, I was a child in the 50s, a teen in the 60s, a young adult in the 70s, and a young mom in the 80s.  It’s been a turbulent, colorful time to grow up, and I’ve enjoyed every minute of it and written about most of it.  I am a member of the American Christian Fiction Writers, blog on several writing sites, and have an active critiquing relationship with another writer.  I  mentor other writers, speak to writers’ groups, judge writing contests, and continue to enjoy the world of words.  This book is contracted with Pelican/White Rose Publishers, with an expected debut date of Sept. 20,2019. For more information on "Westward Hope" and other work, e-mail me at ampie86@comcast.net.